Most Americans eat “3 squares a day.” That’s the way we were brought up. 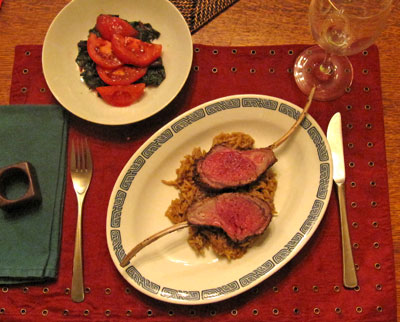 When we were a family of four, I had a job and Carol did the cooking. On weekends — after the kids were a certain age — everybody would get involved in cooking special meals, often with recipes from Julia Child or James Beard.

Kids moved away to college and each became the cook in his living arrangement — rather than clean bathrooms.

Carol and I moved to San Francisco and she had a swell full time job with benefits… and a commute. I was eventually managing partner of a bookstore, could walk to work and had the time and interest to do the menu planning, shopping and cooking. That worked out fine. And then we retired and moved to Reno and we were both around the house all the time. I wanted to continue doing the menu planning and cooking… but Carol wanted to cook too and our ideas about what to cook and eat didn’t often coincide. We made weekly menus, but often diverged from those along the path of least resistance, and meals were more often thrown together than carefully planned and executed. 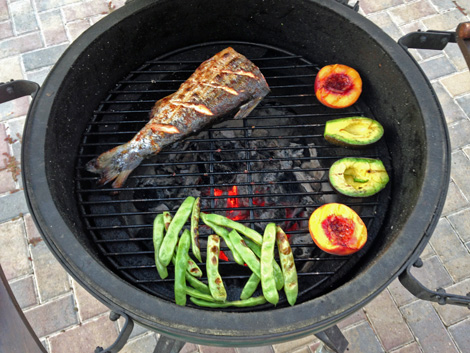 In the wonderful weather months (most, in Reno) the Big Green Egg often ruled — steaks, sausages, chicken, fish and so on, but this last winter some new things came upon the horizon… expanded take-out options at certain restaurants. And we began hearing and reading about companies that wanted to sell food subscriptions complete with measured ingredients and recipes. And all of a sudden Blue Apron and Hello Fresh were here in Reno.

We were having dinner out with another couple at LIBERTY, one of our favorite downtown restaurants, and they told us they tried Blue Apron, and liked it.

**You cook incredible meals from scratch with perfectly portioned ingredients and step-by-step recipes.
We send you higher quality food at a better value by cutting out the middle man and delivering ingredients at their freshest.
Blue Apron’s uniquely integrated model means better ingredients, better pricing and a better planet for us all.**

That sounds good, but I like to shop for myself, especially the fresh things… how do I know where the food comes from?

Then I got this email from LIBERTY, Mark Estee’s Food and Wine Exchange in Reno. They now do Custom Grocery Baskets. I know and love their food, and know where it comes from.

I looked at the list; Carol and I made selections and I called McKenzie.

I told her that it’s probably too much food for us for a week, maybe every other week. Fine with her.

I was very excited. I picked up the food on Wednesday and made a new menu to spread it out over the next several days, bearing in mind that if we wanted to order for the next week, we would need to notify McKenzie on Friday.

So here’s the way our menu looked that week.

We were supposed to order on Friday for next week. McKenzie said it would be ok to skip a week, buy we had other plans as noted in the letter below:

Dear McKenzie,
We love the Liberty food, that’s why we ordered the Custom Grocery Basket.

As we were working our way through the meals, we learned a thing or two: We like to eat good food, but equally important, we like to cook. Warming up food — no matter how good — for meals is just not what we have ever done — except for leftovers. So preparing your meals felt like leftovers for a whole week.

The idea of picking meals from a list, with no shopping or cooking seemed appealing to these old folks, but it turned out we were eliminating some pleasure from each day. Not only that, since we were eating Liberty food every day, we didn’t want or need to go to your restaurant, and we like to go to your restaurant; it’s a nice environment and we are always greeted with joy and respect.

That said, we wish to decline future Grocery Baskets. Thank you for your understanding, and we will see you soon at your place.

I guess the phrase in vogue is: “What’s the take-away?” What did we learn? We reinforced the notion that we both like to cook, and we haven’t yet found a shortcut unfettered planning and preparing our main meals. Oh, excellent prepared foods are available at Liberty, and even Raley’s, but not suitable to us for a steady diet. But we can be liberal about working those foods into our weekly menus.

One thought on “Menu Story”