We still cook every day. And after 2 1/2 years in Reno, we’ve learned to live with each other. Carol and I each do our own breakfast and lunch, but we’ve learned to (often) share the cooking of dinner. When I grill, she will do sides, when she cooks the entrée I will do the vegetable or salad. Agreeing in advance on “What’s for dinner?” helps.

And, to a great extent, we’ve reverted to simple, often-used recipes. Oh, Carol still reads her women’s cooking magazines and peruses Epicurious, Food 52 and the like on her iPad, but what ends up being cooked is basic and good — most often from books or my recipe files.

When there is a question, out comes the well worn copy of Julia Child’s “The French Chef Cookbook” from 1968… autographed in 1976 at the opening of Boston’s Faneuil Hall Marketplace.

So here’s some stuff we’ve cooked lately, and where it came from (breakfasts are all mine, C does yogurt and fruit most often). 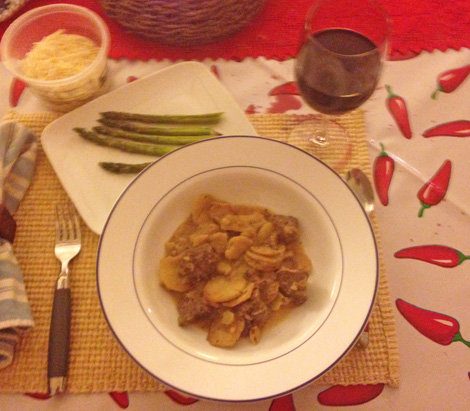 Carbonnade de Boeuf a la Provencale accompanied by Bonnie Doon Cigare D (Central Coast Red Wine) from The French Chef Cookbook. Basically, a beef, potato and onion stew baked with Parmesan on top. We probably do it twice a year in cold weather. If we do it for the two of us, there’s always leftovers, if we cook for more, it’s long gone. It’s rather elegant in a way, and the leftovers are fabulous. 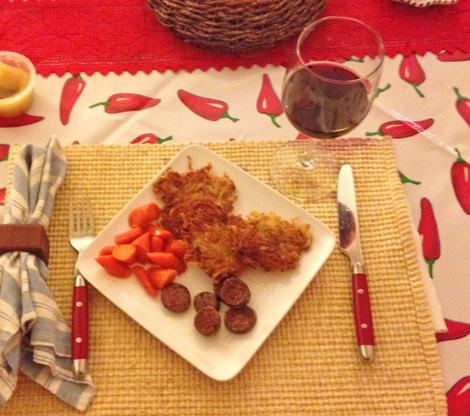 Latkes: “Potato Pancakes w/Apple Sauce & Sour Cream” (Kartoffelpuffer mit Apfelmus) from the Time Life Foods of the World Series, 1968 German Cookbook.
This is Carol’s old standby recipe tailored to goodness.
Actually, I prepped the potatoes and onions… C saw it and said, “That’s a lot!” Well, yeah. So we ate 3 or 4 each and had maybe 8 left over… I ate for breakfast twice, and there was still some left for another dinner.

BRUSSELS SPROUTS IV
SF Chronicle 11.3.04: Brussels Sprouts With Mustard-Caper Butter
Adapted from “Local Flavors,” by Deborah Madison (Broadway Books, 2002). I modified by slicing the Brussels sprouts very thin and made BRUSSELS SPROUTS IVa: Thin Sliced Brussels Sprouts With Mustard-Caper Butter
Recipes left from SF call for things such as salt-packed capers and green garlic. Not in Reno, so just substitute what you have. I subbed chopped garlic for green garlic and regular capers for the salt packed. Still an EXCELLENT dish. C sez we might even try slipping it to Brian.
Used the Japanese slicer with the “batch box” to slice the Brussels. Perfect. Cooked in the Wendell Wok.

Sometimes I like soup for breakfast on a cool morning. Not too much, and it has to be creamy. This is Dole Carrot Ginger soup from a box. I get about three servings from one box. Put it in a small bowl and tuck it in the microwave for about 45 seconds. Yum.

The Usual melon, vegetable and fresh curd cheese. This time with some steamed broccoli and white beans tossed with a vinaigrette and served in a new bowl I bought at the Dollar Store.

“This take on coq au vin has it all: tender, moist chicken, flavorful root veggies and an incredibly rich sauce;to top it off, it’s a one-pot meal. If it’s your pleasure, duck legs are a great substitute for the chicken legs.”

This recipe is why I bought the book. As with the Carbonnade, we cook this a couple times a year. I made it with three chicken legs… 1 3/4 pounds from Reno Provisions . These are trimmed to perfect serving pieces. Beautiful. Kung Fu Girl Riesling, a wine that the RGJ claims is “best value of 2014” was used for the cooking. [We discovered it months ago.]

This is a fine step-by-step recipe of assembly. Served with Bonny Doon “The Heart Has it’s Rieslings”

The authors of the Bi Rite Market Cookbook start with an essay on “Creating Community Through Food.” Here, they explain their philosophy and family:

FOOD
buy it with thought
cook it with care
use less wheat & meat
buy local foods
serve just enough
use what is left
Don’t waste it.

Pan Fried Dover Sole.
No recipe. Just flour it and saute in butter. C does a really fine job with pan fried fish and I’m happy to let her do it. When she suggested asparagus to go with, I said, “Just don’t broil the asparagus, the buds tend to get all burnt.” So she went for The French Chef Cookbook and cooked it in water just like Julia always did it. Perfect. 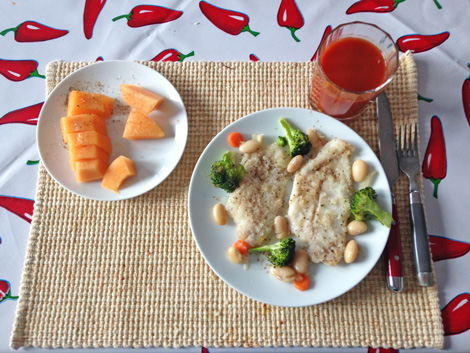 fish for breakfast, a favorite

So I’ll end with my breakfast of the LO Sole with vegetables and a side of melon. I put the thin fillets on a plate with the vegetables and stuck it in the Breville countertop convection oven for 10 minutes at 250°F. YUM.

4 thoughts on “The way we cook now; simpler times”