I saw Thresher Shark steaks in the fish case at Raley’s: pure white, about half the size of swordfish steaks (and about half the price); about 1/4 pound each at an inch thick. I have grilled shark steaks in the past — probably in San Francisco — but don’t remember much about them except they weren’t memorably bad. And I don’t recall they had a name.

I wondered what a Thresher Shark might look like. From the size of the steak, not overly large, the way one thinks of a Jaws-variety shark.
I found a picture on the website of the Florida Museum of Natural History

thresher shark in its habitat 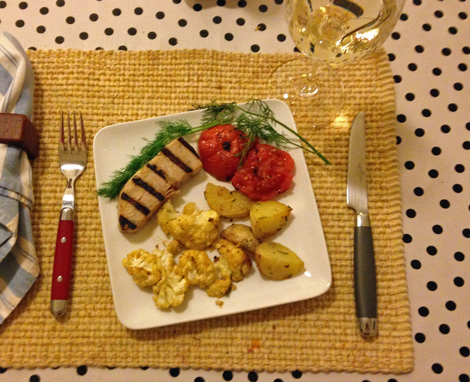 Well, they look odd. But they taste gooood. I cribbed a Swordfish with Dill Vinaigrette recipe from the days of Siren Sea SA and adapted it to the EGG for Thresher Shark.

Marinate your inch-thick, 4 ounce Thresher Shark steaks in some of the vinaigrette.
Grill the steaks at about 350 and set the timer for about 4 minutes per side until the temperature approaches 130°F. Transfer the steaks to a platter and poke several holes with a fork so that the vinaigrette can seep in. Drizzle the vinaigrette over the fish. Reserve some vinaigrette to dress you salad or vegetables.

I grilled tomatoes alongside the shark and C made Dijon Roasted Cauliflower. Perfect.