We got to downtown Cooperstown around 10am to find free parking everywhere in the winter. Crude signs grace all the meters on Main Street and in the big parking lots behind the storefronts. In the shade on Main Street, there was a chill in the air and a nasty breeze. We posed in the sun for pictures in front of the Hall of Fame. Admission for Seniors, $12. 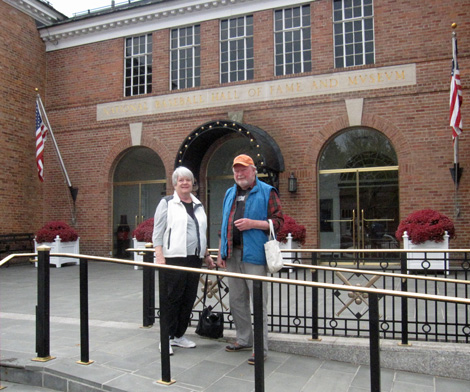 Ready to soak up some baseball on a cold October day.

I love the idea of the Baseball Hall of Fame and enjoy the debate leading up to selection time. It’s too bad that the curmudgeons of the Baseball Writers Association of America is so up-tight and has seen fit to elect only a handful of non-oldtimey players over the past few years. Of course there is extreme controversy over the “steroid era” players such as Barry Bonds and Roger Clemens. We’ll see how that plays out.

I loved KNBR promoting their broadcaster Jon Miller for the “Broadcast Wing” of the HOF and his subsequent selection. 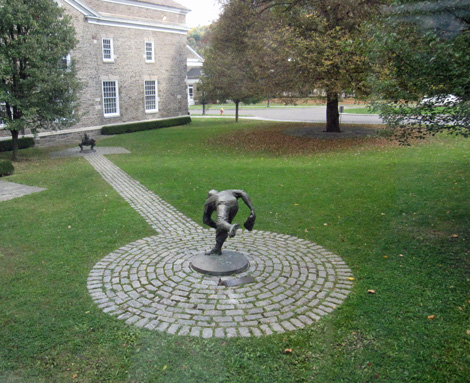 Pitch and catch outside a window near the Broadcast Wing.

That said, I found the actual National Baseball Hall of Fame and Museum a huge disappointment. The organization is sketchy. I guess it’s organized by era, but then, sometimes isn’t. The design and graphics for the exhibits is just horrible. Stuff is somewhat grouped in glass display cases… say 3 jerseys, 5 bats, a couple of gloves, some caps, some shoes… with no clear relationship, no title for the group and you have to get really close to read the “captions” for each item on gray business card type stock. They too are all one size letters with no emphasis. So an old guy like me is constantly stepping back to get the overview, then stepping up, glasses on to read the little cards, then stepping back, and so on.

They should take a cue from the touring exhibit I saw when the All Star Game was in San Francisco. That exhibit was of course smaller, but clear and organized and “Hall of Fame worthy.”

As for Jon Miller, he has a 3×5 card — 2nd from right in 5th row, fortunately in color — on a panel between two posts at the top of a ramp. That’s the “Broadcast Wing.” It is embarrassing.

As for the “Scribes,” they are on the other side of the same panel. More scribes than broadcasters are represented.

I think these are uniforms and so forth of players that were drafted to form the Mets. But it’s not clear.

At the top, it says

“Can’t anybody here play this game?” When I got home I Googled it to find out what it meant.

For years author Jimmy Breslin claimed that “Can’t anybody here play this game?” was an actual quote from New York Met manager Casey Stengel. Then several years later in another book that he wrote, Breslin admitted he had made up the quote.

The World Series exhibit — of course featuring the Giants this year — was great; and most especially the display of World Series Rings through history. Awesome.

Eric said I should take a picture of Pete Rose and Barry Bonds together. Well… not in this Hall. I took a picture of each… Pete for the hits record, Barry for his home run records and most ever MVPs. 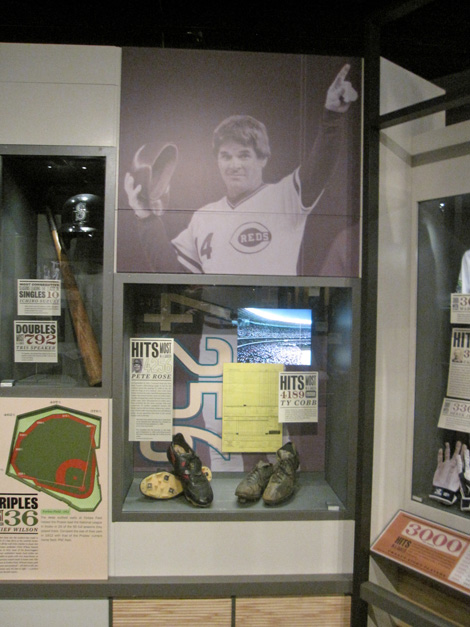 read the captions for the batting helmet and 1st Base bag

On May 28 2006, Barry Bonds gave this first base a fleeting glance as he trotted around the diamond following the 715th home run of his career, passing Babe Ruth for second place on the all-time home run parade.

They have a really nice and encompassing display for Henry Aaron, by the way.

Perusing the hall of plaques on the first floor, it took a while to become acclimated. The plaques are grouped by when the player was elected, not when he played. I wanted to take a picture of those that I admired and saw in person, so I gravitated to the later years and found Rickey Henderson (1979-2003) and Jim Ed Rice (1974-1989) in the 2009 nook. Also in that nook was Joe Gordon, who played for the Yankees 1938-1950. I found Dennis Eckersley (1975-1997) — another of my faves — in the 2004 group. I didn’t find Yaz (1961-1983) because I couldn’t remember just when he retired or might have been elected. It would have been nice to have a directory somewhere. 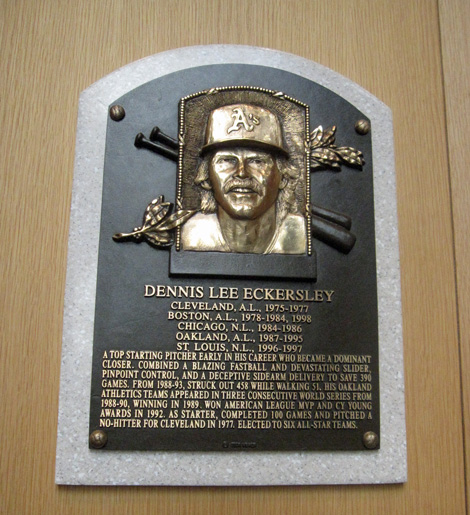 It seems as though The Hall organized everything the easy way, whether or not it was the right way or the most user friendly way.

There seemed to be a paucity of modern players, as well. In fact, there are many more players elected through the old-timers votes than those elected during their 25 years of eligibility. Just sayin’.

OK then, I’m totally glad we went and spent the 2 1/2 hours we usually allocate for a museum visit. Carol and I agreed that there were some good things to see and it was an overall worthy experience.

After, we walked to the other end of Main Street to a swell restaurant called Alex & Ika… we needed to sit. I had my eye on the Sesame Noodles, but Carol ordered them ahead of me. I always like to try something different when we eat out, so I had the Grilled 3 Cheese Sandwich with a side of Curried Cauliflower. The Cauliflower was GREAT. Very tasty. [When I got home I went searching for Curried Cauliflower recipes.] 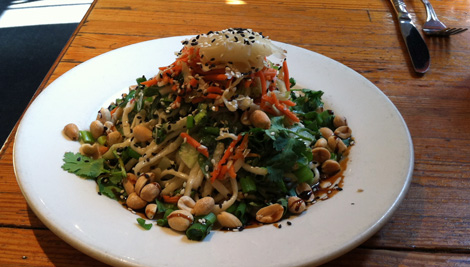 We went window shopping by the baseball themed shops up and down Main Street. Couldn’t resist a “Most Interesting Man in the World” type tee shirt:

on the back, “Stay victorious my friends”

I’ll bet you can guess what the blue shirt on the right says.

Cooperstown is a pretty, small town at the southern end of the more than 5 miles long Lake Ostego.

It has not grown all commercial and out of proportion because of the Baseball HOF. The downtown shops are limited to the old brick buildings on the five blocks of Main Street and some on the perpendicular Commercial Street. The “supporting acts” for the town and HOF are clustered about 9 miles south of town on Route 12 — motels, supermarket, liquor store, fast food and so forth, including our Holiday Inn Express.

When dinnertime came, we drove back towards town to Bocca Osteria. The place was crowded and a nice buzz of happy people hung over the room. The only table left on this Friday evening was a high metal table with metal stools — the kind we usually try to avoid — but these were surprisingly comfortable. We split the “Carne” thin crust pizza from the wood fired oven… basically a Margherita with chopped meat. Damn good.

Got ‘home’ in time to watch the Cardinals beat the Dodgers by 8 runs to claim the National League Pennant. Good for them.

On the highway, I set the cruise control and headed for the Mass Pike and Newton, Boston and Reno. The journey to Cooperstown — one of our better road trips — was nearly over.