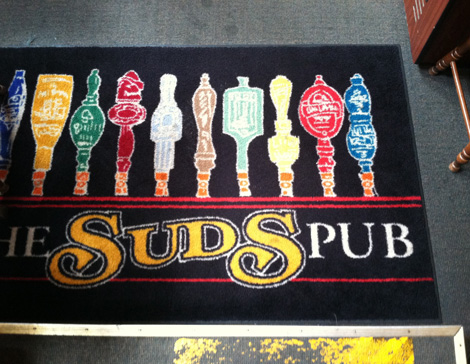 We’re in a cool downstairs bar space, high windows streaming with light despite the still gray skies. The U-shaped bar was table-height — the space behind the bar lowered — so we’re sitting at the bar in SudsPub in actual chairs. Nice. We’re in the heart of Red Sox country in Bethel, Maine on our way to the Baseball Hall of Fame in Cooperstown NY. The Sox are playing the Tigers in the American League Championship yet the bartender is wearing a Bruins sweater and guys at the bar are talking Patriots.

“Bowl o’ Clam Chowda,” sez I. Carol orders the Fish n Chips. We had agreed that I would share her chips. 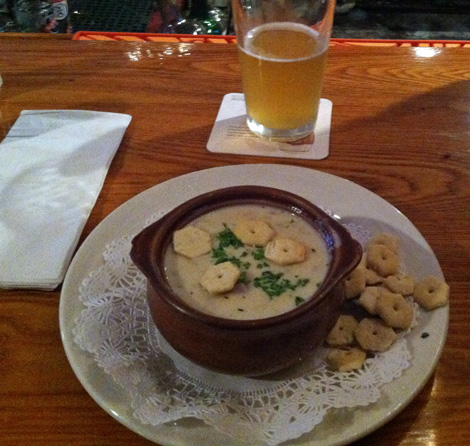 The clam chowder was the real deal, obviously house made with real clams and not overly thickened with flour.

We started driving west this morning. Our itinerary showed Wednesday as a Belfast day, but we had done Belfast things and got to thinking — with Eric’s help — about a leisurely leafer-peeper trip across New England back roads to Cooperstown instead of blasting down the Maine Turnpike and across the Mass Pike, etc. Good thinking Eric. 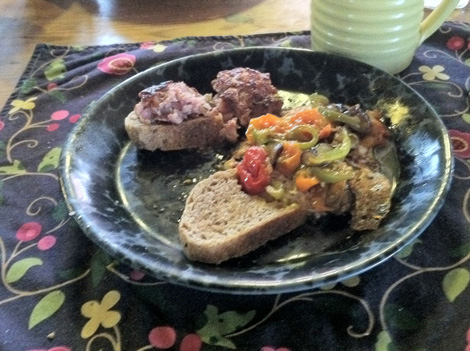 OK, then… Eric whips up a sausage and quasi-ratatouille and egg-over breakfast and we’re off at 10am under gray skies, me driving.

On the road again. Feels good. 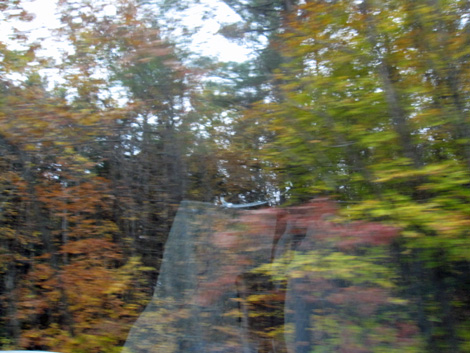 We took Route 7 north out of Monroe, driving past MOFGA — where I had just spent a significant and fascinating three days — to Route 2 and across Maine to lunch in Bethel. Route 2 is the direct route west across upper New England. Not a ton of people up here and two lane double yellow line road is smooth going but doesn’t offer many passing opportunities. 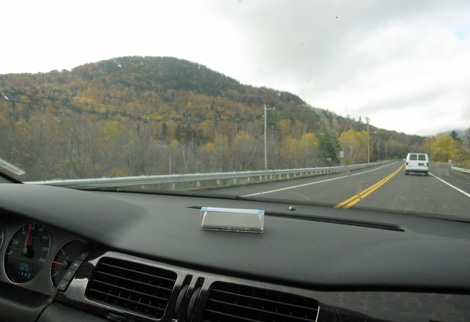 It seemed like we followed this white van with New York plates all day. She was going at a good speed — we learned the van held five women — it’s just that there it was, in our view all the time.

After lunch, we drove on and stopped for gas in Lancaster NH. Who knew? 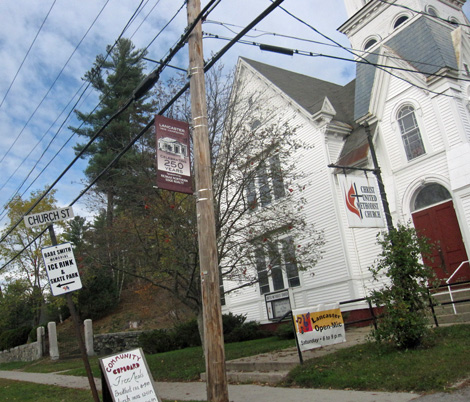 We reached Montpelier, Vermont a little after 5pm and decided to stop, even though we were programed to go on to Rutland. Following visual cues, we crossed the Winooski River toward the gold dome of the State Capitol and turned right on — guess what — Main Street to check out a big hotel. Looked it up on Safari… average rate $225 per day. No thanks. Looked corporate and stuffy anyway. 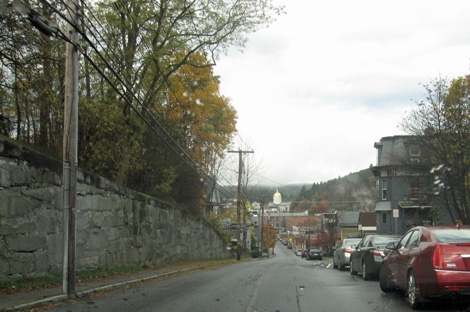 He said, “Best place is Betsy’s B&B, down this street about 3 blocks.” He gave a couple of other suggestions, as well. Said Betsy’s will probably be full because of the “leaf-peeper season.” 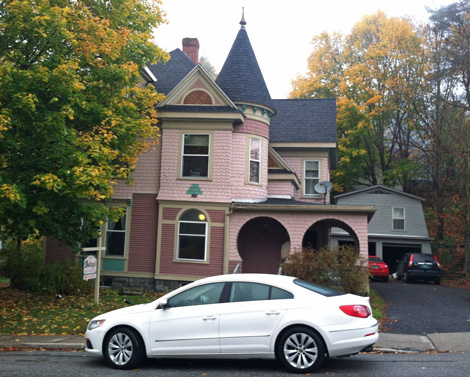 Betsy’s. Ours is the red car… our room has the light on.

I always believe in going to where I want to be first. We drove straight to Betsy’s. She had a couple cancellations because of a medical convention ending. WooHoo! Nice room; very B&B. We figured out where on the TV the Red Sox would be and went downtown for dinner.

We walked up and down in all directions from the main traffic light and finally found ASIANA, a Japanese Fusion restaurant featuring Sushi and Maki.  Darned good, but not many choices in downtown Montpelier. Probably won’t be back. 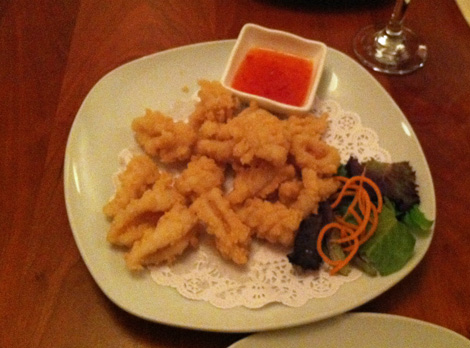 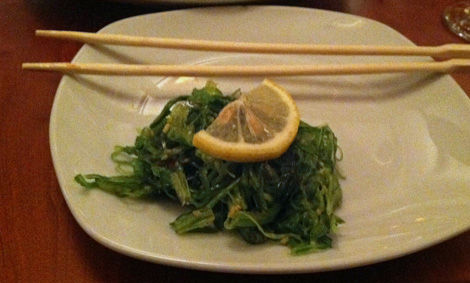 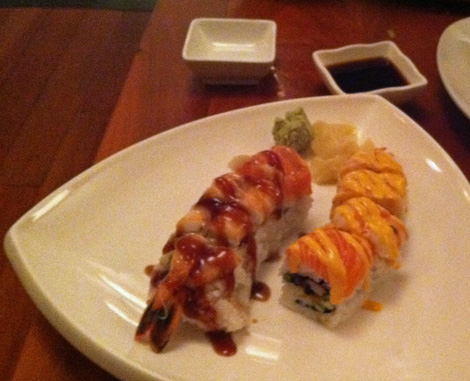 “Home” in time to watch the Sox get their sox knocked off by giving up 7 runs in the 2nd inning. They came back to lose only 7-3 though.

The morning took us west, still on Route 2 until we turned south on VT100 — very Vermont beautiful — to VT17 ESSS-ing and twisting up the Green Mountains and down past Mad River ski resort. 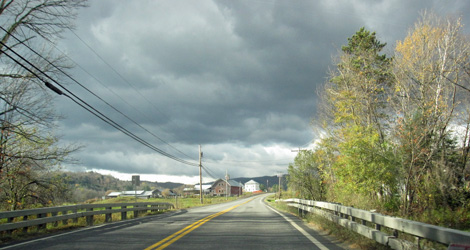 We stopped at a Jiffy Mart in Brandon VT for coffee and a pee. There, I continued my search for a traveling coffee cup and scored… a GREEN MOUNTAIN COFFEE coffee cup, smallish, but tall with a twist top. (So nice that I”m still using it.) 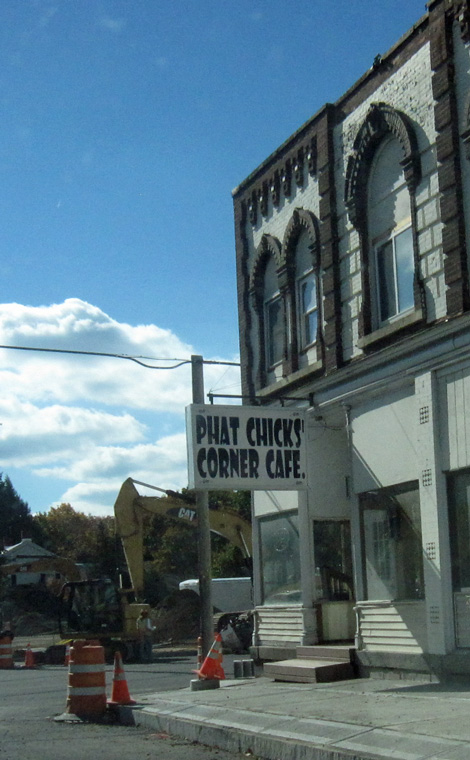 Sorry, couldn’t resist this picture in the outskirts of Saratoga Springs NY 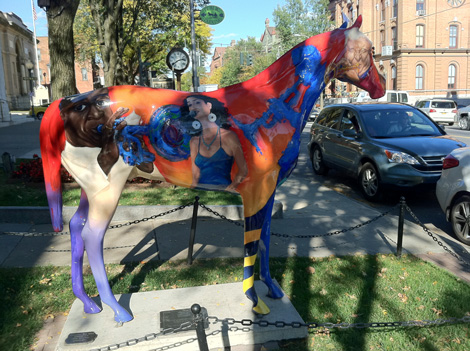 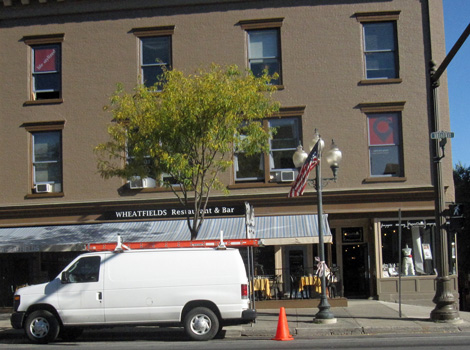 That was a lucky and very good choice. C had the mussels (always a favorite if on the menu) and a salad. I opted for Thai Sweet and Sour Calamari with a side of Spaghetti Marinera.The red sauce smeared on the rim of the plate is very hot sauce, excellent in small doses. It didn’t look that great, but it tasted swell… the sweet and sour ain’t no lie. 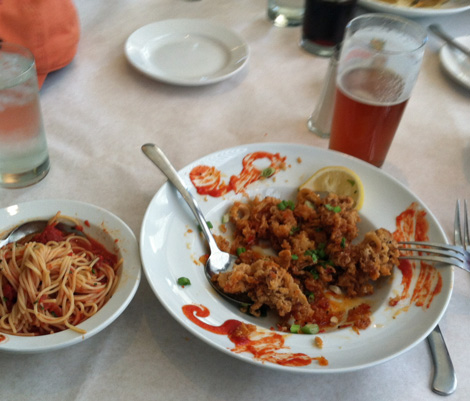 From the restaurant, we were able to call ahead to the Holiday Inn Express in Cooperstown and reserve a room.

From there it was Route 29 to 30 to 20 to 80 to Cooperstown. The roads were all of the 2-lane variety that we had experienced through Maine, New Hampshire and Vermont, all in fine condition and leading us through beautiful countryside. The only nasty part was Route 30 past Schenectady. NY 80 led us along Lake Ostego for five miles or more and suddenly we were in downtown Cooperstown. We found the Hall of Fame and cruised up and down that street before we took Rt 80 out the other side of town to OUR Holiday Inn Express. There, on the front desk at check-in we were given homemade sugar cookies for a nice snack.

We asked at the Front Desk where we might find dinner close by — we’re five miles or so out of town — and they directed us to the Council Rock Brew Pub, a tiny place just down the road. Carol had the Burger — perfectly cooked she said — I had the Brat, likewise. Turns out they cook on a grill outside. 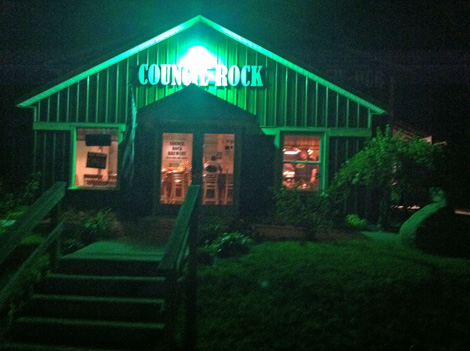 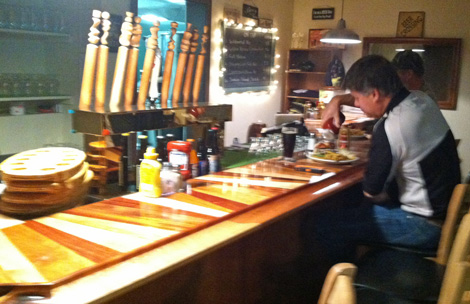 … and plenty of brews on tap.

Back “home” we saw Game 5. Sox 4 Tigers 3. WooHoo. On to the Cardinals and the World Series.