pig to eat and an actual recipe

DAY 8 TUESDAY 10.15
Funny. No pig to process. But Eric fried up some sausage for breakfast.

Of course, he doesn’t just fry up some sausage, he adds the trimmings, in this case, onions and peppers and bread toasted on the wood stove.

sausage and stuff, V8 and coffee

We got back to real life. Eric catching up on work while Carol and Alison did some laundry and I did some reading and journal writing.

laundry swinging in the breeze

We took a ride into Belfast to look around. Stop on the waterfront for a Growler of beer at the Marshall Wharf Brewing Company. 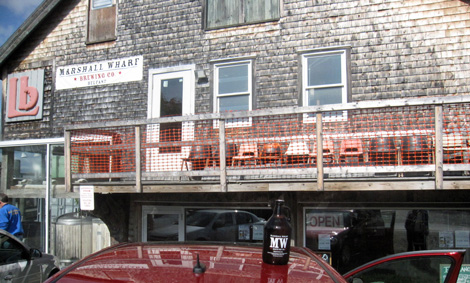 Belfast has a new waterfront walk… 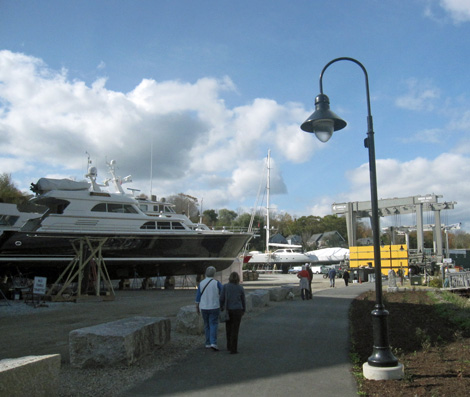 and a new industry, the Front Street Shipyard,  biggest on the coast of Maine (not including Bath Ironworks, of course, where the Navy’s newest destroyer was built). It’s a clean industry — as opposed to a chicken operation formerly on this site — and they can handle some pretty large boats.

last tomatillos of the season

While we were doing pig things, Alison picked all the tomatillos left standing in the garden. I was volunteered to make something with them, using as much pork loin as I could manage. Maybe a green chili. I recalled using tomatillos for the chili I made for the Sierra Canyon Chili Cookoff, so I looked that up on eats, and looked for ideas in Mark Bittman’s How to Cook Everything. There was one chili recipe, “Chili Non Carne.” I adapted it to use the pork and the tomatillos and used his spices and suggested cooking times.

Cook 2 cups of dry beans with one onion by your usual method. Drain and reserve bean juice, just in case you need some. (Or open a can of beans.)

Select enough tomatillos to produce 2 cups and peel off their papery skins. Roast  at 400°F for one hour. Wrap 6 to 8 cloves garlic in foil and roast with the tomatillos.

Mash garlic and mix in with tomatillos. If you don’t have 2 cups, add some bean juice.

Cut up 1 pound meat (our pork tenderloin). Brown with peanut oil, season with salt and pepper, and add to pot. Cook about 15 minutes more.

a nice bowl of green