Breaking down the sides…

We are entering the middle day of our journey from two snorting and snuffling pigs to some hams, bacon, sausages and the like.

Today, we’ll smoke some bacon, make some headcheese, start some hams, render some leaf lard, and have a swell and somewhat unusual lunch, make big pieces into little pieces and sort them.

These are the vegetables for Head Cheese, or what Fergus Henderson in his book “Nose to Tail Eating” calls BRAWN. We’re looking at onions, carrots, leeks, celery, garlic, lemon zest, a splash of red wine vinegar, bundle of herbs and a small handful of black peppercorns. While I prepped the vegetables, the pig’s head in water was coming to a boil in a big pot. When it got to a simmer, I stuffed the vegetables into the pot. 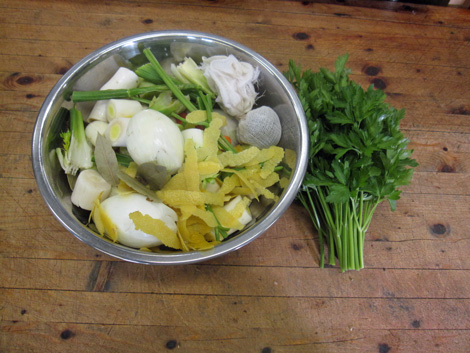 After about 2 1/2 hours, everything comes out of the pot and the remaining liquor is reduced by half. The vegetables are discarded and all the good bits of meat are picked out of the head. A terrine will be lined with cling film, the bits of meat added, the reduced liquor poured over and refrigerated overnight to set. The bits leftover will be made into patties, breaded and fried. That’s for tomorrow’s lunch.

My other job-of-the-day was to cook up the pig lungs for lunch. When they were harvested yesterday and before going into their sterilized tray, one of the students picked it (them?) up and blew them full of air. Hey, they work.

I trimmed the lungs of their gnarly parts, cut into small pieces and parboiled. Sliced a boatload of onions and got all that going over a very low flame. That would cook until lunchtime, almost three hours. Salt and pepper was the only seasoning.

Meanwhile, the ribs were cut out, trimmed and roasted. 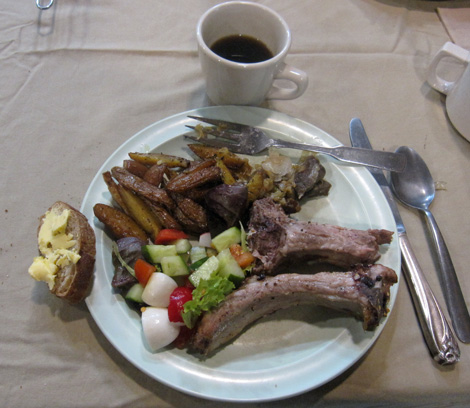 This was a very nice lunch. When I went back for seconds on the ribs, the lungs were totally gone. Bummer. I was surprised that the lungs didn’t taste at all like organ meat. Probably because they are so fresh.

Meanwhile, the prime cuts; hams, loin, ribs, chops and roasts are cut and the balance of the meat is cut into bits for sausage. These bits are sorted by lean and fat so they can be mixed in proper proportion. The shoulder (Boston Butt) has perfect proportion by itself. 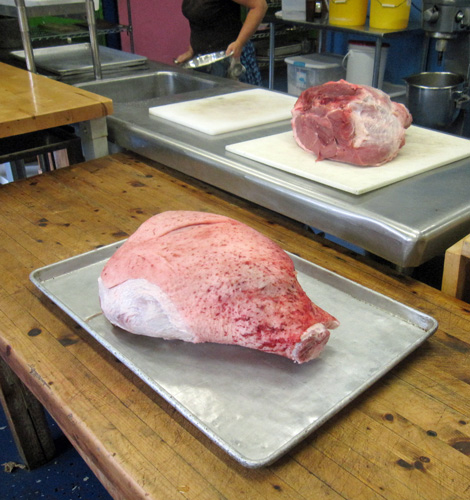 some of the lean meat being cut

The cut meat is put in that yellow bucket, weighed and then sorted into hotel pans and labeled for its ultimate use. Tomorrow, we’re going to make 5 kinds of sausage and a pate.

These are the more fatty cuts.

The person top right is cutting the skin from the meat. The skin will be boiled until tender and go into sausage as fat. 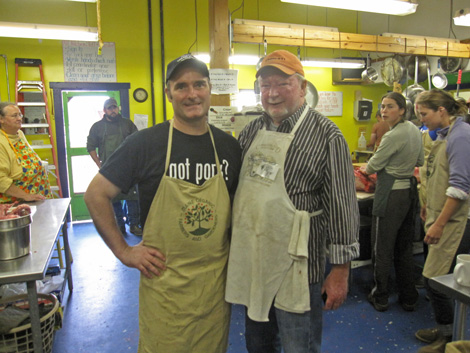 Alison requested this picture. It was hard to catch Eric standing still long enough to pose.

At the end of the day, what once had been carcasses, was transformed into hotel pans of various cuts of meat. 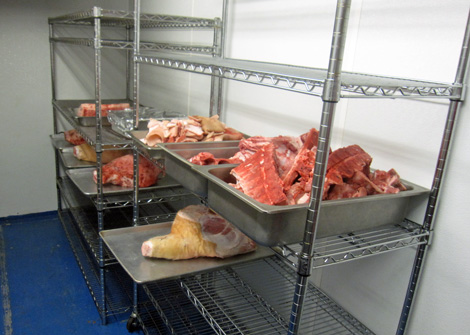 A cooler of pig.