A sunny day — somewhat chilly outside — the warmth of family in the house. Football on the TV settles into the background. Folks are taking turns in the kitchen on their various dishes. The food, simple, but highly qualified to be described as Thanksgiving Dinner with all the Trimmings.

Gathered at our table, Brian behind the camera.

We bought a fresh turkey at Raley’s and ordered it butterflied and wrapped with neck, giblets, backbone, etc. The butchers did a great job and had it all wrapped and ready for us. (hint: wait until the week before Thanksgiving to order. Prices plummet.) 13 to 15 pounds was the size they offered; ours was 14.9 pounds, way too big for four folks, but there you go.

DAY BEFORE
When we unwrapped the butterflied turkey, we found it oh-so-easy to cut in half. We froze half, for a later date. Rubbed the fresh half on all surfaces with Diamond Crystal Kosher salt and put it in the refrigerator uncovered, overnight.

BROTH
Made broth with giblets, neck, backbone and whatever spare parts we had. You know how to make broth, don’t you? If not, see this.

DAY OF TURKEY
Two hours before oven put the 1/2 cup butter and the turkey on the counter to come to room temperature. Don’t wash the turkey.

Preheat oven to 425°F Allow 15 minutes extra so it’s really hot when the bird goes in.

Mix 1/2 cup butter, 2 tsp each minced fresh thyme, tarragon, rosemary and sage in a small bowl. Transfer 2 generous Tbsp of the mixture to another small bowl and reserve for gravy; let stand at room temperature. 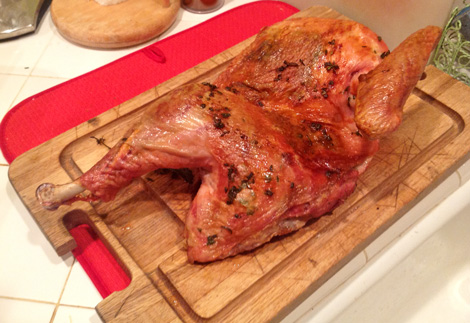 Our half-turkey, roasted and ready.

Gravy
Strain pan juices into a saucepan. Use your favorite method to degrease. Add reserved herb butter to juices and bring to a simmer. Stir in about 1/4 cup of Wondra flour. Add about 3 cups turkey broth and continue to stir, adding flour or broth to achieve the desired thickness. Cook at least 10 minutes. 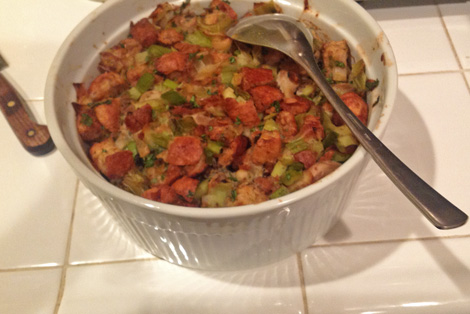 Brian’s Oyster Dressing out of the oven.

Brian’s Oyster Dressing
Brian made this for a Thanksgiving when he lived in France. He didn’t write it down, but a friend did, and years later, she emailed it to him for his first Thanksgiving in Reno.

For two 8-ounce jars oysters.
Cut bread, without crust, into cubes of nearly an inch; About 4 or 5 cups.  (Actually used three grocery-store-bakery hoagie rolls from the day-old bargain bin.)
In a bowl, toss the bread cubes with olive oil. Toast in a 400°F oven until crisp.
Chop and saute 3 slim leeks (white and tender green parts) in butter — or preferably in duck fat if you have some — for about 10 minutes, to soften; mix into the bowl. Drain liquid from the oysters into the bowl. Chop oysters to same size as bread cubes and add oysters to bowl. Add about 1 1/2 cups turkey broth, season and mix all together.
Pour into a casserole dish.
Bake in 325°F oven for 45 minutes.

Note, he initially used giblets in the dressing, but this time, he chose not to because they were used for stock before he got here.

Mashed Potatoes
Make the proper amount of mashed potatoes by your favorite method. These were made with Creme Fraiche and chives.

Melt 2 Tbsp each of olive oil and butter in a heavy skillet or sauté pan. Add 1 package (thawed) frozen pearl onions and sauté them over high heat for 2 minutes to brown slightly.
Add 1 1/2 tsp salt/pepper mixture and 1/4 cup broth. Reduce heat to low, cover and simmer for 10 minutes, or until just tender when pierced with a paring knife. Add 1/4 cup Scotch whisky and cook for a further 5 minutes, until the alcohol has volatilized and the sauce is slightly reduced.

Cook’s Note:
This was the first time I tried this dish with frozen onions. The preparation is really really easy — duh, no peeling — but they’re not nearly as good as fresh.
To remove the skins from fresh pearl onions, drop the onions in boiling water for a couple minutes, drain and transfer to a bowl of cold water. Cut off the root ends and pop the onions from their skins. 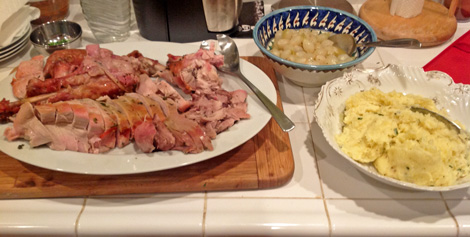 Turkey carved with sides of pearl onions and mashed potatoes. 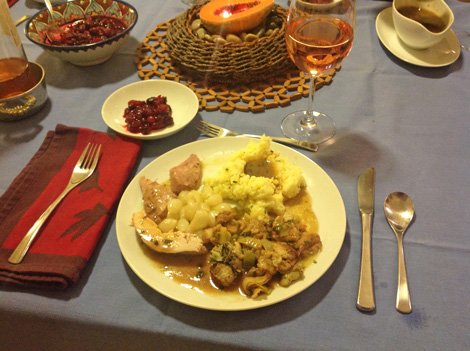 My plate, with a dish of cranberry sauce on the side.

Natasza’s Fresh Fruit Dessert
Natasza is the dessert person. Here, she made individual shells of sweet pie crust, and in each placed a strawberry slice, raspberry and bits of kiwi fruit; dollop on the whipped cream, please. 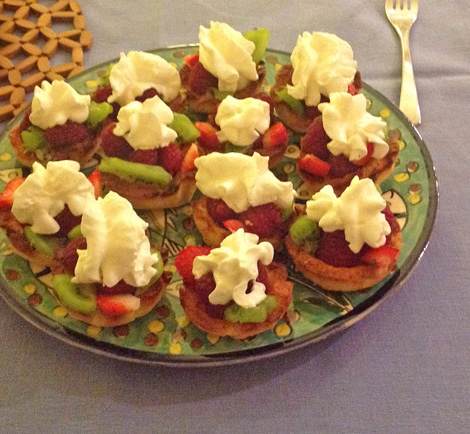