Don’t worry, everything we do is about food…
Turns out we will experience  ‘Nawlins food.

Here we are on January 29, the Sunday between the last NFL Playoff game and the Super Bowl. The sun is shining and the temperature on my thermometer in the shade is 55°F at 10am. Gotta get out of the house. What to do? 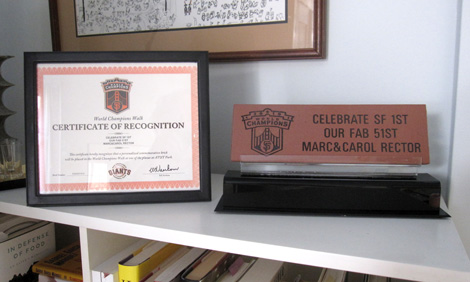 our replica brick and certificate

Oh, yes… back last summer, we bought a brick commemorating the Giants 2010 World Series Championship. I know from recent morning walks that such bricks have been installed in the plazas around ATT park. On such a day, we need to go find our brick. 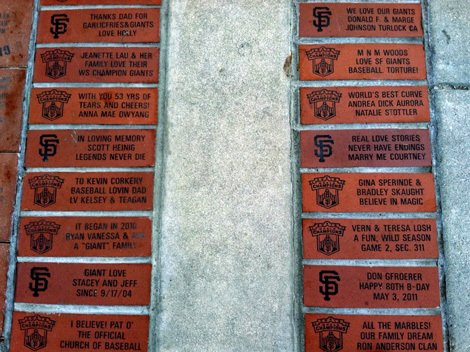 First off, it is just real nice to be out around ATT Park. There are thousands of bricks to look at. In order to move as quickly as possible, Carol devised a scanning method… just concentrate on finding a “C” in the first line, “Celebrate SF 1st.” We started in the sunny Willie Mays Plaza. Not there. On to the Lefty O’Doul Plaza between the Dugout Store and the Portwalk. Nope.

We walked the length of the Portwalk to Seals Plaza. There are more than a few people out enjoying the sunny day by the bay. Parents and kids and bikes abound. Seals Plaza has a handsome statue of a Seal, but not our brick. The walk by the players and VIP parking lots is not the beautiful part of the park… and the 2nd and King Plaza is in the shade. Nonetheless, it does not hold our brick. Bummer. I guess we’ll be in that unfinished circle in Willie Mays Plaza. But its too nice to dwell on “bummer,” we have food in a lovely environment to find, and Marlowe’s is nearby… but closed.

The first rule is stay away from Chinatown on Chinese New Year. We’ll go to Hayes Valley. There’s a restaurant there I’ve been wanting to try, I think on Grove, but I don’t know its name. If that doesn’t work, we’ll go to the Marlowe clone in North Beach.

“Those are only the two busiest, most congested places in town,” said Carol. “Yeah, but, it’s Sunday afternoon,

we’ll do OK… better than Friday or Saturday night.” Be patient, a space will open up… people come and go… Grove… Octavia… Hayes… Laguna… BINGO, a woman pulls out of a space on the corner of Laguna and Grove. By then I had remembered the restaurant should be at Grove and Gough.

We walked there and found a glassy building with people inside dining, but no sign… around the corner, “The Boxing Room.” That’s it! As we were seated, I said to the hostess, “This is our lucky day, we found a parking space AND a table for two.”

The room is very nice, high ceilings are populated by interesting lights and chandeliers and the room is filled with light and air. 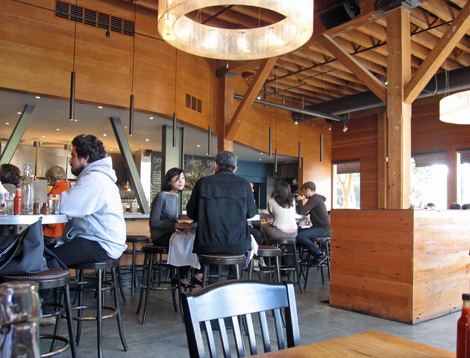 One can intuit the quality of the dining experience, from the design of the table setting, the menu, napkin, even the water bottle etched with THE BOXING ROOM. House made crackers and a pimento cheese butter mixture are in the basket. Yum. I believe we might be in for a treat. 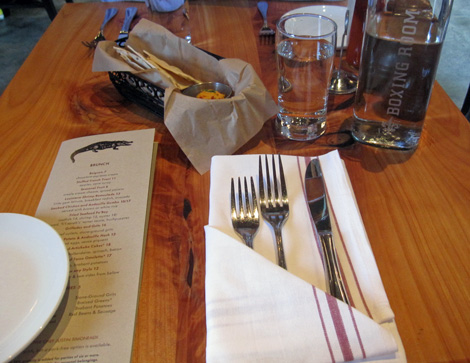 Sweet potatoes, white potatoes were hashed up with a little green pepper and onion with just a glaze of a spicy cajun roux on the bottom of the skillet. Oh yes, and the fried eggs on top were smaller than large, a nice touch. 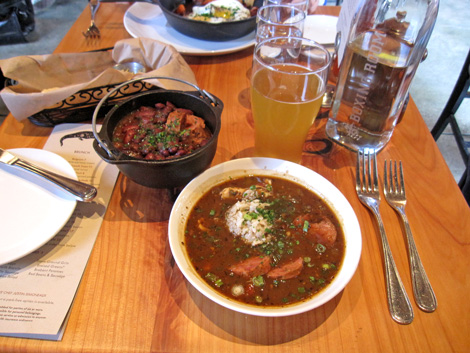 I ordered the small Smoked Chicken and Andouille Gumbo with Brown Rice; Red Beans and Sausage on the side. Just reading the menu made me hungry with anticipation and the food didn’t disappoint. Spice was abundant, and very agreeable the way a ‘Nawlins dish should be seasoned. The Andouille was fine-grained and seemingly sliced from a large sausage. I polished off the gumbo, but the red beans added too much for me to finish. I’m about to have them for lunch in a few minutes.

We always look at dessert menus, but seldom order dessert, especially at lunch. Well… how could I pass up a share of pecan pie with ice cream? Could not. The best thing; it was not sweet and not gooey, just pecan goodness with enough filling to hold it together over a dense and succulent crust.

It turned chilly in the afternoon, but we were all over the Chronicle and NY Times, with the Pro Bowl on the TV just because it was on.

Leftover cabbage rolls with Carol’s gussied up sauce put a fine cap on the day.

5 thoughts on “A most fabulous city day”