Sometimes, just before waking up, before the alarm goes off, my mind starts going: where will I walk today? What will I make for breakfast? What day is this? Is anything going on? If its sunny, the Marina would be good, but it hasn’t been sunny in the morning in weeks. Have leftover grits… I could open the bacon… what will I put over grits? Tradition calls for shrimp and gravy, but I don’t have any of that. Don’t have any tomato sauce open either… I could chop a tomato and make sauce… what if I sliced a tomato and just heated it… put that over the grits? Hmmm… worth a try.

I got up and made coffee. Out the window, it’s not sunny on Union Street, but it’s too early for the sun to be over Russian Hill. When I went out the door and looked down the street, “Its sunny in the Marina!” I said to anybody around. A woman was about to cross Polk Street, but I doubt she heard me.

I had a good walk — in the sun on some streets and the Palace of Fine Arts. Lovely day to make some grits and tomatoes.

Palace of Fine Arts designed by Bernard Maybeck for the 1915 Panama-Pacific Exposition.

Last night, I actually made the grits. I had the idea I would poach my cod in a ginger-soy poaching mixture so I have this cod on my plate in a pool; around the pool is a wall of grits. Off to the side — or better, in the corner of the plate — I could array my haricot vert tossed with blue cheese and pecans. It didn’t exactly work out that way, as you shall see, the grits were a bit too loose, so they made kind of a pillow for the cod. Things don’t always work out visually the first time, but everything tasted real good.

cod poached in ginger soy liquid with scallion and cilantro

So, this morning I got out the bacon, grits and a tomato. I fried the bacon and drained on a paper towel, poured off a little bacon fat and put the grits in the skillet. All I need is to warm them, they’re not going to make a nice crust no matter what. Bacon onto the plate and the grits over that and the plate in the oven to keep warm while I cook the tomatoes. 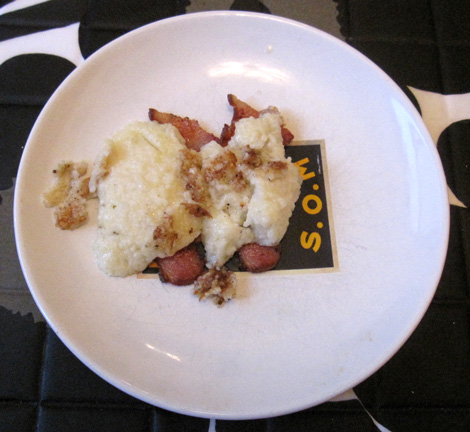 At this point, I could put a flipped egg on the grits and that would be breakfast; the comforting taste of the egg and grits becoming one. Today, I put the sliced tomatoes in the skillet to warm in a little olive oil.

Once warm, just slide the hot tomatoes onto the plate over the grits and bacon.

Salt and pepper makes breakfast. And a darned good one. Yum

One thought on “GRITS 2 WAYS”