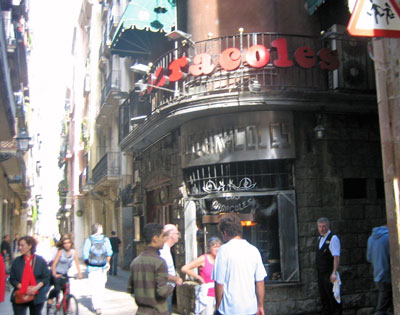 My eye was drawn to this place on my after-lunch walk, as workers were cleaning the spit where chickens twirl before flames during service.

Los Caracoles = snails. I first ate snails while on a Navy cruise in 1964, in Barcelona, prepared in tomato sauce. Could have been here.

I looked it up in my Lonely Planet guidebook: “Started life as a tavern in the 1890’s and is one of Barcelona’s best-known restaurants.” Probably was here. Sounds like a candidate for dinner.

We needed to pass by a bank machine, and did on our way at eight o’clock, stylishly early for dinner. We passed a line reaching around the corner for La Fondeau, on Calle Escudellers. In the next block, in front of   Los Caracoles about seven folks were hanging outside the door. Inside, a line was formed alongside the right wall, while the crowded bar occupied the left side of the space.

One was meant to go to the end of the bar and down a few steps to the Maitre d’ stand, but who knew? It seems that there were a number of large groups of footballers — there’s a big match coming up — and when I worked my way to the Maitre d’ and said, “dos, por favor,” we were waved right in. I collected Carol and we followed his wake through the kitchen with a room-size coal-burning stove in the center, meats and stews and sauces bubbling and roasting away on top. Up some steps and around a bend we found a fine table for two.

The room, and indeed the entire entry procedure screamed ambiance. Leather bound menus were on our table and soon a waiter came by for questions.

I was there for the caracoles in a tomato sauce — specialty of the house. Anything else would be a bonus. It was listed as an appetizer, so I felt compelled to order salted cod in a tomato sauce as an entrée. Carol ordered the Gazpacho and a half chicken, spit-roasted.

The waiter rather insisted that we have a certain Spanish Chardonnay and it turned out to be the highlight of the evening. Everything was good, except the gazpacho, which was very good. The chicken was a little too salty, the caracoles a little too muddy rich, the cod a bit tough, the rice not quite cooked enough.

The room seated about 30. Stone walls with a wood wainscot were arrayed with hundreds of signed, framed photographs of the rich and famous. The room felt fabulous.

Groups passed through, going to and from the back, guys carrying stacks of plates came one way, guys carrying huge paella pans came another, everything moving, changing in a great dance of food. What a place! It’s okay that the food is just good and the prices are over the top. I came for memories and theater and I left with a bellyful.

2 thoughts on “Food and Memory”